Helping Anyone & Everyone Understand New Technologies

Teaching Boys in the 21st Century 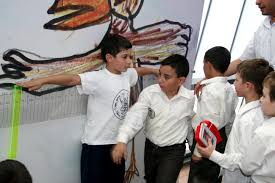 The teaching of boys  and young men deserves special consideration; for at least the last two decades, there has been increasing concern that boys are falling behind in formal education.  Instinctive differences between boys and girls are well documented in various educational, psychological and sociological studies.  Among the many differences, it is widely recognised that, generally speaking, boys are more challenging to discipline than girls – and boys are less interested in formal education.  Simply put, boys tend to be more restless, disruptive and prone to distraction than girls.

Year after year, for example, statistics show that the majority of school exclusions tend to be boys.[1]  As well as behaviour problems being more prevalent with boys than girls, it has been demonstrated repeatedly that girls outperform boys in school (e.g. Mieke Van Houtte, 2004).  International data shows that in 70 percent of the world’s countries, girls outperform boys in every curriculum subject – even including countries where women’s liberties are severely restricted.[2]  This would explain why female university students and graduates worldwide now far outnumber their male counterparts – a trend that shows no sign of changing.[3]

For the most part, these facts and statistics about this “boy crisis” are well-known.  What is not so widely acknowledged though, is how modern life can be more problematic for boys than girls – particularly within the formal education system.   The problem, according to Sue Palmer (2009) in her book, 21st Century Boys, is that nowadays we live in an ‘electronic village’ – a marketing and screen-based culture, which inhibits healthy eating, good sleep routines and free play – from an early age.  While these trends affect all children, they tend to more negatively impact boys.  Many youngsters, especially boys, seem to be pursuing what Sue Palmer calls a ‘loss of the mind’ – the erosion of conscious identity through technological fixes, for example.

The issues for boys in particular, are very real. This is important for teachers to realise, in order to have greater levels of empathy and understanding for the boys they teach.  Boys have a greater likelihood of suffering not just from purely academic and behavioural problems, but also ‘developmental disorders’.  For instance, the ratio of boys to girls experiencing the following developmental disorders shows a marked disparity:

Evolutionary biology might help to explain some of the differences that we see in the classroom in terms of behaviour.  Naturally, over time, males have proven to be significantly more competitive than females, more violent and more likely to take risks.  In the classroom of course, these tendencies manifest themselves as more rambunctious and restless behaviour on the part of the boys.  In terms of emotional problems, Sami Tamimi (2005) notes that:

‘The big difference is that boys externalise their problems and it comes out as bad behaviour – girls tend to internalise it, as sadness.  Boys’ issues are therefore issues for others, not just themselves.’

This externalisation of poor behaviour matters not just in the classroom, but for society in general.  As Sue Palmer (2009, pp. 4) states ‘if boys aren’t reasonably civilised, confident and able to exercise self-control by the time they reach their teens, they can become a problem for society: four out of five criminal offences are committed by males.’  It has been calculated by policymakers in the United States for example, that if just 5 percent more boys completed secondary school and matriculated to college, the nation would save $8 billion a year in welfare and criminal justice costs (Reichert & Hawley, 2010, xi).

There are several strategies teachers can initiate, to at least mitigate the particular issues facing boys in the classroom.  First and foremost, when issues do arise, it is important that teachers coach parents on appropriate measures to take at home.

At a minimum, parents ought to provide the following:

This might sound like common sense but sadly, it cannot be assumed that all parents are doing these things.  Most parents for instance, in my experience, do not put limits on their children’s use of screen-based devices.  Many children, I know, have a computer and/or television in the bedroom – with no restrictions on their use.  It is also normal for a great many children to gorge on fast food and sugary beverages.  Teachers must therefore use workshops and parent-teacher conferences, to advise parents to limit their children’s use of screen-based entertainment and to make sure healthy food is regularly provided for them.

For teachers’ lesson delivery, there are at least four approaches, which I have found boys respond particularly well to:

Activities that involve physical movement – During my several years of teaching first graders (6 to 7 year olds), I would periodically get them jumping up and down for 2-minutes at least twice a day.  I would play music during this activity and make it a competition to see who could jump the highest!  The idea of course, was simply to get the children (specifically, the boys) to expend as much energy as possible.  Immediately after such an activity, the children would approach their classroom activities much calmer.

Competitions – Boys naturally tend to be more competitive than girls – and nothing gets them more excited and engaged than a good competition.  Quizzes, games and projects can all be easily embedded into the teaching process.  Online resources such as Quizlet and Kahoot are good choices to use at the beginning of the lesson or as part of the plenary.

Hands-on learning refers to learning by doing.  Activities that get students making can help them to think critically about what it is they are learning while teaching them the design process and how to solve problems.  STEAM activities and Makerspaces offer good places to start with hands-on learning.

Flexibility – as with all learners, irrespective of gender, it is important to remain flexible.  It tends to be boys in particular, who do not appear to be natural learners in the formal educational setting.  These boys may show little interest in completing worksheets, working kindly with others or reading the class text.  Differentiation, however, is an important aspect of teaching.  By teaching successfully, you will adopt flexibility in your teaching approach, to differentiate according to the needs of all the students in your classroom.  Having taught boys with Attention Deficit Hyperactivity Disorder (ADHD) and Oppositional Defiant Disorder (ODD) for example, I know first-hand what frustrating challenges these issues can present for the teacher.  In such situations, I have found it necessary to establish special learning stations, in which certain students can work freely on tasks and challenges that interest them.  Although these students may not always work on the same learning objectives as others in the classroom, this is precisely what it means to be flexible and differentiate.

[1] Statistics from the UK Department for Education show that boys tend to be excluded three times more, on average, than girls: https://www.gov.uk/government/collections/statistics-exclusions

Top 5 Versatile Technologies to Help Your Business Succeed in 2022

Car rental as a business. How to start?

4 ways I use drones in education

4 Things to Note When Starting a Managed Service Provider Business