There are two types of primary memory: Random Access Memory (RAM) and Read Only Memory (ROM).

– It is used to store data, files , or parts of the operating system that are currently in use

– It can be written to or read from and the contents of the memory can be changed.

In general, the larger the size of RAM the faster the computer will operate.  RAM is much faster to write to or read from than other types of memory, but its main drawback is its volatility. 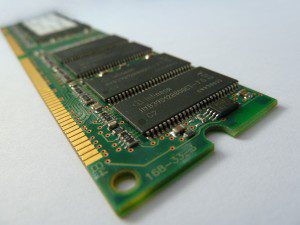 There are two types of RAM technology:

1. Dynamic RAM (DRAM) chip consists of a number of transistors and capacitors.

– Capacitor – this holds the bits of information (0 or 1)

– Transistors – this acts like a switch; it reads and changes the capacitor’s value as necessary.

Each of these parts is tiny since a RAM chip consists of millions of transistors and capacitors.

DRAM needs to be constantly refreshed (that is, the capacitor needs needs to be recharged every 15 microseconds otherwise it would lose its value).  If it wasn’t recharged, the capacitors charge would leak away very quickly, leaving every capacitor with the value of 0

2. Static RAM (SRAM) chip does not need to be constantly refreshed – but is more expensive and power hungry than DRAM.  Since SRAM provides much faster access to data, it is used for the computer’s cache memory.  This is used to store program instructions that are frequently re-referenced by software during operation.

The features of Read Only Memory (ROM):

– It is used to store the start-up instructions when the computer is first switched on (for example, ROM might store basic input/output system (BIOS))

– The data or contents of a ROM chip can only be read; they cannot be changed. 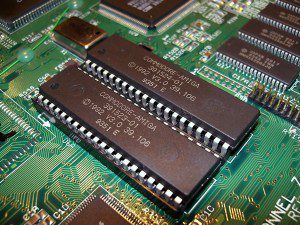 A microwave oven, for example, contains both RAM and ROM chips:

– stores the different preset cooking options, including temperature and time to cook.

– the user may choose to program in their own routines; these new instructions would be stored in the RAM chip.

5 Ways Teachers Can Use Online Courses to Enhance Their Lessons