The global news landscape has changed dramatically in recent years. News readership has increasingly shifted to the Internet because of inexpensive technology, ubiquitous access and free content. This has led to a trend of information democratisation in which information control has shifted from a few powerful entities toward smaller outlets and individual citizens. User-generated news sources like blogs, wiki pages and YouTube videos are now commonplace. As a result, according to the Pew Research Center (2012), the audience for news on the Internet has grown from nothing in 1993 to second behind only television.

Although the Internet brings users more news, there is consequently more uncertainty about whether news sources – both traditional and otherwise – are providing relevant or even credible information. Powers (2010, pp. 5), for example, states that young people in particular, report being overwhelmed by the amount of news sources and content available online. This makes it increasingly important for news consumers to develop digital literacy skills that allow them to weigh the value of what they read, see, and hear.

News literacy, a fundamental yet too often unrecognised area of digital literacy, helps students to foster a more intellectually rigorous relationship with news media. News literacy is neatly defined by Schwarz (2011, pp. 1) as ‘the reader’s ability to critically evaluate, interpret and process as well as participate in news media’. As we live in an increasingly interconnected and globalised world, I would argue that the word “global” should also be used when discussing news literacy; much of the news content viewed online is from international journalism networks, which create what Reese (2012) refers to as a “global news arena”. Reese explains that bringing a global perspective to news literacy requires a basic awareness of how national contexts differ; it means taking concrete local circumstances into account while being aware of how they differ from other areas and how global forces bring “influence from a distance”. 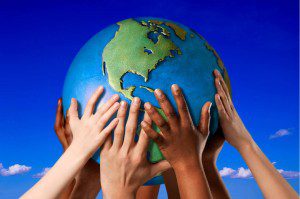 We need to know what is going on in the world if we are to be truly internationally-minded. CC BY-SA 3.0

Global news is a highly complex, albeit important subject. In my context of working as teacher in a bi-lingual British school in El Salvador, I have seen the importance of this subject manifest in the overall objectives of the International Primary Curriculum (IPC) and International Baccalaureate (IB). These programmes correctly consider themselves to be leading proponents of international education and are designed to promote international mindedness (Stagg, 2013). Students on the IB for example, are required to keep up-to-date with current national and international news events relevant to their areas of study. Moreover, one of the traits and values of the school is “international mindedness”, encouraging students to develop a cosmopolitan attitude and willingness to learn about life in other parts of the world. All of this forms part of the Council of International Schools (CIS) accreditation process, which asks schools to ‘demonstrate a commitment to internationalism in education’ (CIS, 2013).

Unfortunately, despite the buzz words in the curriculum and the rhetoric of schools, little is actually done to facilitate learning about the world in which we live. Specifically, the most relevant sources for informing students (and their teachers) about social, economic and political events happening around the world – global news media – are widely absent from the classroom. This seems to be the case in educational institutions around the world (Stagg, 2013; Schwarz, 2012; Buckingham, 2003).

In July, 2013 I therefore began putting together designs for the user interface of what would become News on Atlas, a web application with the purpose of addressing this issue. I have been working closely with a programmer, Daniel Rivas, to develop the functionality of this application, while ensuring that it is easy to use and runs smoothly. Since its inception, the objective driving this application’s development has remained unchanged – to improve users’ global news literacy. This is an important area of international mindedness and, in my opinion, should be taught in schools alongside digital literacy.

Powers, E. 2010. Teaching News Literacy in the Age Of New Media: Why Secondary School Students Should Be Taught to Judge the Credibility of the News They Consume. Washington University in St. Louis. http://openscholarship.wustl.edu/cgi/viewcontent.cgi?article=1454&context=etd

Schwarz, F. 2011. Media Literacy and the News. Windesheim School of Media in Zwolle, the Netherlands. http://www.windesheim.nl/~/media/files/windesheim/research%20publications/120319_media_literacy_and_the_news.pdf

I have discussed previously about the advantages of using Swivl technology for teachers to film themselves teaching.  Having now tried a 360-degree camera in…