The Dash & Dot robots provide an entertaining introduction to the world of programming for younger children.  Having bought a set of five Wonder Pack kits for my school, I’ve been impressed with what these robots can do.  Created by Wonder Workshop, the robots are already fully assembled on purchase but require one of five different possible iPad apps in order to play.  By interacting with the world around them via sensors, Dash & Dot can hear sounds, detect objects, and know if you are moving them.  The iPads apps then enable you to program these robots to do virtually anything you want, including the delivery of messages, playing musical instruments and navigating obstacle courses. 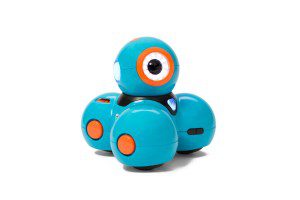 Dash is the exploring robot because he is the one that can drive around. 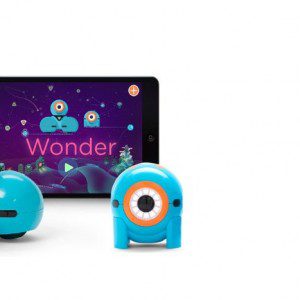 Dot is an instigator – he can appear to communicate with Dash through lights and sounds.

The Go app is the best place to start.

The interface is intuitive, and children can easily customise Dash or Dot’s colors, eye lights, voice, and can drive Dash. The app is perfect for introducing students to the possibilities of what Dash & Dot can do.

The Path app introduces the basics of programming.

Children can easily use this app to draw a path for Dash to follow. In the process of drawing the path, they can add different sequences of events to get Dash to perform different actions along his route, e.g. making a sound, lighting up, etc – the basics of sequencing and event-based programming. This app is suitable for children from 5 years and up.

The Xylo app enables children to compose and create music. 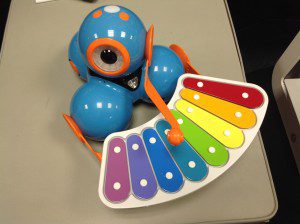 Using the xylophone accessory that comes with the Wonder Pack kit, this app enables children to compose songs and program Dash to move around while playing music. The idea behind this activity is to teach children the concept of sequencing and loops.  It also comes with readymade songs, e.g. My Mary Had a Little Lamb, that Dash can play using his xylophone.

The Blockly app builds on children’s programming knowledge by introducing conditionals and loops.

Providing a similar visual programming language to that of Scratch, this app provides endless programming opportunities, teaching children sequences, events, conditionals and loops. Blockly is recommended for children 8 years and up.

The Wonder app is the latest addition to this series of apps for Dash & Dot.  The video below shows a group of children using the Wonder app to program Dash.

Explain that in this lesson children will learn how to control the robot, Dash using the iPad app, Go.  Model opening up Go on the iPad, and then show students how to use the interface to control Dash: make his head move around, move him around, get him to make different sounds and light up.  Ask for a volunteer to come forward to see if they can use the controls on the iPad to make Dash blink.

Students experiment with using the Go app on the iPad to control Dash & Dot.

Ask: has anyone worked out how to record their voice on Dash & Dot?  Bring forward volunteers to demonstrate using Dash & Dot.

Sitting the children down in a circle, tell them that in this lesson they will learn some basic programming using Dash and Dot.  Using the iPad app, Path, children will need to design a path for Dash to follow.  Model this on the iPad.  Dash will move along the path as it has been drawn out on the iPad.  Explain how we can also add different sounds along this path, which Dash will make in the same sequence as he moves along the path.

Students use the Path app to draw different paths for Dash to take.  As the students advance, they can unlock new themes and special animations.

Making sure that children are sat in a circle, ask for a volunteer to program Dash to move along a path within the circle that the children have made.

Explain that in this lesson, the children will be composing music for Dash to play.  They will be using the Xylo app on the iPad and the xylophone accessory.

First, model how to attach the xylophone accessory to Dash’s body.  Then, ask: what do we need to connect next?  Elicit that the next thing we need to attach is the mallet, which should connect to the left side of Dash’s head.  Once these two parts are attached, open up the Xylo app.

Show the children how, by tapping on the different colours, we can create a sequence of different sounds, as each colour represents a different note.  You can demonstrate this by playing one of the readymade tunes, e.g. My Mary Had A Little Lamb.

The children experiment with composing their own music using the Xylo app and Dash.

Ask for volunteers to play the music that they have composed using the Xylo app.

Following an invitation from the Google trainer and former Coordinator of the Innovation & Technologies Department at CTJ, Carla Arena, I recently had the…