The Raspberry Pi is a very small computer (about the  size of a credit card).  It was developed in the UK by the Raspberry Pi Foundation to encourage the teaching of basic computer science in schools, and in the words of the Foundation “put the fun back into learning computing.”

One of my ongoing projects at school has been to run a Raspberry Pi extra-curricular club for upper Key Stage 2 students. 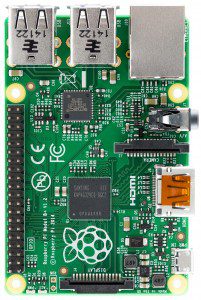 This is the Raspberry Pi B+ model, which replaced the original in July 2014. As with the previous model, the circuit board and chips are fully visible. There are several peripheral components that are needed to run the Raspberry Pi, including a USB keyboard and mouse, a micro SD card (with Raspbian installed), HDMI cable and a monitor. 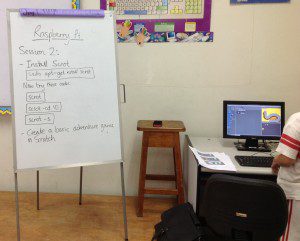 At the beginning of each Raspberry Pi session (lasting 1-hour) we go over the main objectives for the activity, which are written up on the whiteboard. The objectives, key terms and instructions are deliberately kept short in order to promote questions and critical thinking from the students.  The students then follow the activity handouts (above).  Each activity handout uses an intuitive colour-coding convention in which instructions are in black, relevant background information is in blue and any definitions are written up in red. 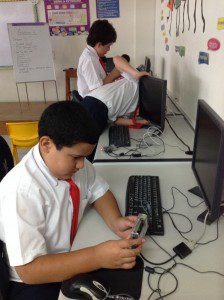 The first session begins with students setting up the Raspberry Pi computers, familiarising themselves with all the relevant hardware and software. Minimal instruction is given to the students, so that they can better understand the role of each component firsthand.  Once students are familiar with the hardware, they should get into the habit of disassembling the different components too.