On Christmas Eve last year, I arrived in Manaus, the capital of the Brazilian state of Amazonas and the start of a journey to learn more about the Amazon jungle.  A short while later, my good friend Kenny joined me on this amazing trip.  As it was such a unique experience and place to visit, I wanted to record my experiences, learning and reflections – so I decided to make a documentary!

It was not so long ago that one might need endless amounts of expensive and bulky video equipment to pull off such an endeavour.  However, digital technology – and video equipment, in particular, has come a long way in the last decade.   I simply used a gimbal, iPhone and directional microphone, as shown in the image below. 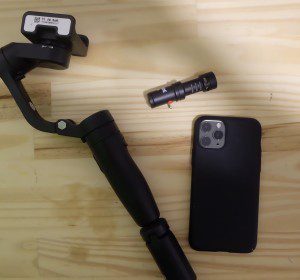 A gimbal is a very useful tool for holding your smartphone, as it serves to support and stabilise the camera.  Using motors and intelligent sensors, it keeps the video recording steady by compensating for any shakiness as you move around.   I used the FeiyuTech VLOG Pocket simply because it is the lightest and most compact model on the market.

The Rode VideoMic Me, which I used, is a compact and lightweight directional microphone for use with smartphones.  It was particularly handy for when I filmed interviews, as it helped improved the sound quality by focusing the recording on the person speaking.  The VideoMic Me includes a furry windshield, which was useful because most of the time I was shooting outdoors and there would often be gusts of wind, especially when I was on speedboats along the river.

Last but certainly not least I made full use of the iPhone 11 Pro – the star of the show!  Much has already been written elsewhere about the iPhone 11 Pro, so I won’t go into detail here.  Suffice to say, this is an extremely powerful smartphone with a brilliant battery life (last 10-hour of more on a single charge).  The triple-lens camera capture d incredible photos and video from a variety of perspectives, and the night mode feature proved especially useful when I was filming the jungle in the dark or when there was low lighting.  The iPhone I used came with 512 GB of storage capacity – plenty of space to store lots of high quality video footage of the wildlife, plants and interviews.

I think the results of this portable setup speak for themselves.  For anyone who might be interested in either the technology used to create this documentary – or in fact, the beautiful and rugged part of the world that makes up the Brazilian Amazon, the documentary is available here on YouTube:

The BETT (British Educational Training & Technology) Show is an annual trade show that showcases the use of technology in education.  This year I…