The main barriers to learning and teaching digital literacy can be summarised as follows: 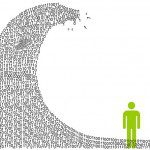 Each barrier shares the same implication, which George Orwell (1945) would refer to as a ‘reduced state of consciousness’.  Such a state of affairs, he suggests, ‘if not indispensable, is at any rate favorable to political conformity’.  Whitworth (2009) uses the term ‘noöpolitics’ to refer to the control of informational resources, and accordingly, its manipulation leads on to what Whitworth would call ‘a noöpolitical construction of hegemony’.  By presenting only particular news stories or presenting them in such a way that they mislead the reader, hegemonic power can be maintained.  Reese (2009, pp. 2), for example, states that:

‘Even in the U.S., where the press system is advanced and highly professionalized, elite journalists reinforced the discursive echo-chamber supporting the decision to go to war in Iraq by internalizing the War on Terror frame promoted by the Bush administration’.

It is through such hegemonic discourse, Whitworth (2009, pp. 8) states, that ‘the public is persuaded to accept the diffusion of military and corporate objectives into everyday public opinion’.

Advances in web technologies show what is possible when news coverage becomes truly global and is unfiltered by noöpolitical constructions of hegemony.  For example, according to Reese (2012, pp. 1):

‘The popular 2011 uprisings in Tunisia, Egypt, and throughout the Middle East, were facilitated by Internet communication, even when the regimes tried to regulate traffic outside the country. The Qatar-based Al-Jazeera television news service provided some of the best coverage of the Egyptian revolt, but its availability in the U.S. was limited by cable operators failing to provide it to their subscribers. In spite of being deemed anti-American by some U.S. critics, the value of its coverage in a critical world hot-spot gave it new professional prestige and led to heightened demand for internet streaming of its programming’.

The upshot of all of this is that as an information processing system, when put to good use, various websites and web apps on the Internet can and do bring people important global news, which would otherwise be filtered out by more mainstream media.  The problem is that, more often than not, meaningful global news is not being reported adequately or sufficiently – as the example of the US “war on terror” highlights.  Instead, the global news that does get reported can be likened to Whitworth’s metaphor of information obesity – in most cases it is not being turned into knowledge to promote transparency between nations or to empower citizens.  It is increasingly important though, that citizens are empowered by global news, which when consumed, can easily be turned into global knowledge, since the biggest problems now facing individual nations are transnational in scale: corruption, economic instability, environmental damage, immigration, etc.  To appropriately address these problems, globally news literate citizens are required who demand and support high-quality journalism around the world.  In doing so, a stronger movement of what Gramsci (1929) called “organic intellectuals” can come into being, people who promote the best interests of the global community and thus bring about progressive change.

Our role as teachers then is to ensure that we are providing an education which fosters organic intellectuals.  In doing so, we can expect to see more young people who are critical thinkers and internationally minded individuals who are able to make positive contributions to the global society.

I have written before about assessment of learning, which is carried out for the purpose of grading and reporting.  Research, however, has shown that…