In some form or other, education has been around since the beginning of the human species.  This is because education, the process of facilitating learning, has always been a necessity.  After all, without education, no generation can be adequately fitted for the duties to perform in the world.  Each succeeding generation inherits the accumulated knowledge of the preceding one, generally becoming increasingly better.

For most people today, school and education are considered synonymously.  This is not surprising given that the experience most of us will have in schools is what is arguably the most important part of formal education.  For example, it is within the school setting that most of us learn to read, develop our skills in social interaction and encounter authority that does not come from a parent.

Indeed, schooling, as it exists today, and therefore education, only makes sense if we view it from a historical perspective.  Unlike other species, humans have always had the ability to organise, store and transmit knowledge in sounds and language.  Prior to technology, word of mouth communication was the only type of education that existed.  From the hunter-gatherer communities to the invention of agriculture, beginning 10,000 years ago, people depended on word of mouth communication to acquire vast knowledge of the plants, animals and land on which they depended.

Our understanding about the way schools first operated comes from ancient Greece, in about 4th century BC.  In fact, the word ‘school’ comes from the Greek ‘schole’, which means leisure.  Back then, when schools were available only to the aristocracy, the assumption would have been that leisure was synonymous with learning.  Elsewhere in the ancient world, prominent examples of formal education were evident in the middle east, China and India, and their systems of education generally emphasised reading, writing and mathematics.  In these times, speech was the primary means by which people learned and passed on learning, making accurate memorisation a critical skill.

Education in ancient Greece stands out during this era though, because of its diversity.  It was the Greeks who first created what we would now call primary and secondary schools.  There was also a lot of emphasis from an early age on physical education, which was considered necessary for improving one’s appearance, preparation for war, and good health at an old age (Plutarch, 1927).  Roman schooling broadly followed the Greek model.  There were small schools for privileged boys, which taught grammar.  Then, the boys attended rhetoric schools, to prepare them for public life (Thomas, 2013).

The first examples of educational technology in the ancient world were the tools that students and teachers used for writing.  Over thousands of years and across the continents, various surfaces have been used as a medium for writing, including wax-covered writing boards (by the Romans), clay tablets (in the middle east), strips of bark from trees (in Indonesia, Tibet and the Americas), thick palm-like leaves (in South east Asia) and parchment, made of animal skin (common across the ancient world). 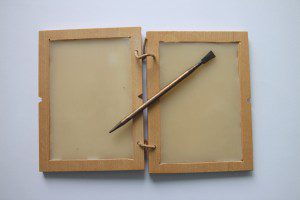 Wax tablet and a Roman stylus 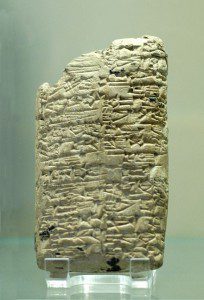 Clay tablets were used as a writing medium, especially for writing in cuneiform, throughout the Bronze Age and well into the Iron Age. Tens of thousands of written tablets, including many fragments, have been found in the Middle East.   Students in ancient Babylonia and Sumeria inscribed their writing on clay tablets with a stylus. These could be used wet and erased to be used again, or baked to create a permanent document.

After the fall of the Roman empire, from about the 8th century, education was mainly the responsibility of the religious establishment.  This was generally the case throughout the ancient world.  By the end of the Middle Ages, and after the invention of printing (a truly disruptive technology), schools would eventually become common in many towns and villages across Europe, with the main intention being to ensure children could read and write.  Then, by the time of Shakespeare’s Europe, in the 15th century, schools had more or less become the education system that can be recognised today.

On the back of the printing press, schools gradually developed a curriculum in which the subjects considered most important were taught.  By the mid-1600s, the modern library and the pencil were introduced, marking the first examples of educational technology.  Later still, the 19th century marked the advent of textbooks and improvements in writing tools available to teachers and students, notably blackboards and chalk, as well as the use of ink pen rather than just pencil.  During this period since the middle ages and until the latter half of the 20th century, learning has primarily been focused on the curriculum rather than the child.  In other words, for a great many children, compulsory education has been monotonous affair, marked by rote learning and memorisation.

The 20th century saw many sweeping changes though, in politics (revolution and war), economics (depression and boom), science (huge developments) and technology (radical advancement), all of which quickly spilled over into education.  The 20th century was a key time in education, when the ideas of philosophers like John Dewey really started to gain ground. 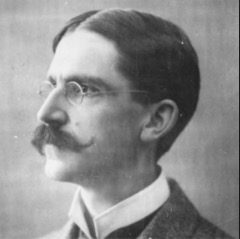 Essentially, John Dewey (1859 – 1952) championed the notion of the child as an instinctive scientist: ‘the native and unspoiled attitude of childhood, marked by unspoiled curiosity, fertile imagination, and love of experimental inquiry, is near, very near, to the attitude of the scientific mind’.

For Dewey, like the philosopher, John Locke 200 years before him, reflective, critical thinking is the centre of education.  Education is not (and should not) be about memorising facts – it is about being trial-and-error thinking, testing and analysing.  Dewey went on to draw a distinction between information and knowledge, noting that schools concentrate on the former at the expense of the latter.  These ideas would eventually crystallise into what has become the pedagogical movement, progressive education, setting the backdrop for constructivism.  Although Dewey himself did not use the term ‘constructivism’, his point of view can be considered a type of constructivism.  Dewey argued, for example, that if students learn primarily by building their own knowledge, then teachers must adapt the curriculum to fit students’ prior knowledge and interests as fully as possible.  He also argued that a curriculum could only work if it related to the activities and responsibilities that students will probably have after leaving school.  He said that schools should be concerned with the education of the whole child, including the intellectual, social, physical, and emotional needs of each student.

To many educators nowadays, Dewey’s ideas appear common sense, but they were innovative and progressive at the beginning of the twentieth century.  Educational reformers and thinkers since Dewey have simply formalised, confirmed and tweaked his ideas.  Dewey’s core ideas therefore, have persisted and continue to be the bedrock of educational practice all over the world today.

Aside from the transition to a progressive pedagogy, digital technology over recent years has had an enormous impact on education.  Representing the second main wave of disruptive technology since the printing press, digital technology, such as computers, Learning Management Systems (LMS) and the Internet, have fundamentally changed how students learn and teachers teach.  Significantly, education is much more accessible now, and teachers have the tools to communicate more engagingly than ever before.  Much of the content on Technology for Learners also showcases examples of digital technologies, which help facilitate the learning process.

Taken together, progressive education and digital technologies, bring us to where we are today – moving ever closer to a flipped learning model, in which students are becoming increasingly autonomous and active in their own learning.

As part of our Computing & ICT curriculum, I run several projects in which students use a 3D Printer Pen.  These pens rapidly melt…